People spend a lot of their time browsing various social media websites and Reddit is not an exception. Reddit is a huge social network and, according to Similarweb.com, is receiving around 1.5B visits each month. As some people call it “the front page of the internet”, it is truly a great place to discuss various topics such as sports, politics, gaming and even VPN services.

VPNs are also widely discussed on Reddit and the subreddit r/Privacy has more than one million members. r/VPN has less – around 95k, while the subreddit “NetflixViaVPN” has around 52k members. With so many members and discussions, people can definitely find an answer to which VPN is the best according to Reddit. Here are the most popular subreddits related to VPN and similar topics:

So, is there anything interesting about VPNs to discuss in such a social network as Reddit? Yes, there actually is! From the topics we reviewed, users tend to come to these subreddits looking for various recommendations, tips, and advice on how to avoid censorship, geo-restrictions, and protect their online privacy.

What do we think about these kinds of discussions on Reddit? We think they’re great and can definitely help people to decide which VPN is the best, although user’s opinions do not differ from our reviews by a lot.

One interesting thing that we spotted on the VPN subreddit is that users recommend avoiding free VPN services because usually, they tend to not only collect but sell user data. VPNroom.com team already wrote about this matter here and the Reddit VPN community has the same opinion.

How the free VPN providers benefit from their users you ask? Free VPNs may profit by exploiting user data for marketing purposes; bombarding users with ads; selling user data to third parties; and using users devices as an exit node for its other services. It is important to understand that maintenance and development of apps and servers cost huge amounts of money and somehow, the VPN provider has to generate income. More information about the dangers of free VPN services.

Reddit users, the same as the VPNroom.com team rate VPN providers based on their overall performance, speeds, security & privacy features and pricing.

The name that has been mentioned the most is NordVPN. The VPN provider is valued for the ability to bypass geographical restrictions and unlock streaming service libraries. Moreover, people speak a lot about their new NordLynx protocol that we have explained in our NordVPN review.

Short about the NordLynx protocol (which is based on Wireguard technology): it provides excellent speeds, which contribute to more comfortable browsing and streaming experiences. Reddit users also compare it to the new “Lightway” protocol by ExpressVPN, but it seems that Express made it in a hurry and it lacks stability and download speed.

By the way, Reddit VPN users are sharing this interesting report that has been published by a German company called AV-Test. In the report, the company states that NordVPN is currently the fastest Virtual Private Network service provider and as a matter of fact, ExpressVPN is not even close to NordVPN: 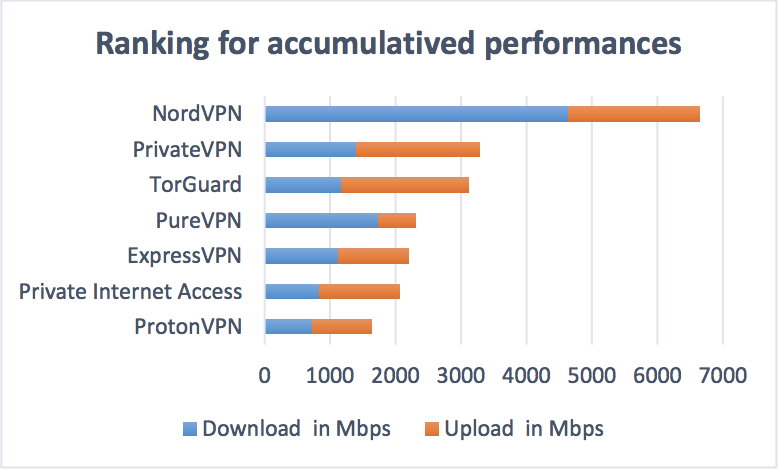 So, which VPN providers are the best according to Reddit? Here’s the lineup we managed to collect after spending a couple of hours on such subreddits as r/VPN, r/VPNreviews, r/privacy, etc.:

NordVPN is one of the most known VPN providers in the market. With their headquarters in Panama, it falls behind the 14 eyes jurisdiction and offers complete privacy and anonymity to their users.

NordVPN offers nearby 5500 servers in 59 countries around the World. That is the biggest number of offered servers among all VPN providers. Also, some of the countries have “Connect to a specific city” feature, which is quite a nice option.

NordVPN is compatible with all major operating systems and devices, such as Windows (from Windows 7 and up), macOS, iOs, Android, and Linux. They also have two nice extensions for Google Chrome and Firefox browsers. With the new NordLynx protocol, NordVPN is the fastest VPN in the market. The fact is backed-up by an AV-Test audit that has been completed in 2020 September.

NordVPN pricing starts from $3.71 a month for a 2 year plan. We think that the pricing is truly decent for quality service like NordVPN.

ExpressVPN is one of the oldest and most known names in the cybersecurity field. Based in British Virgin Islands, it also falls behind 14 eyes jurisdiction.

In our opinion, ExpressVPN is the main competitor for NordVPN and it truly is a great VPN service for beginners and advanced users.

We spent big loads of time trying to see if ExpressVPN has any IP or DNS leaks, but fortunately this provider is reliable when the question comes to data logging or IP/DNS leaks.

ExpressVPN offers 3000 servers in 160 locations – an incredible number of countries available. These numbers will guarantee you incredible speeds and what our tests showed – it is the fastest VPN in the market.

ExpressVPN does allow torrenting and their services give you access to all popular streaming platforms – you can watch US Netflix, Amazon Prime, or stream any sports from such platforms as DAZN. Because of that, ExpressVPN was the number one choice between Reddit users when choosing a VPN for streaming only.

Although Surfshark is rated as the #2 VPN providers on our site, Reddit users think that it deserved a lower spot on the “best VPN for Reddit” section.

Surfshark as well as ExpressVPN is registered in the British Virgin Islands – that means no data logging and great privacy features.

Surfshark has some really good features which are not available in other VPN clients such as the Whitelister (you can exclude specific websites and connect to them with your normal IP). They also offer HackLock™ and BlindSearch™ for users to be fully aware of their email and personal data leaks on the internet.

Surfshark completely bypasses geo-restrictions and works with all major streaming services including US Netflix. However, their variety of servers and countries (1700 servers in 63 countries) is a little bit poor and some of the servers are virtual.

Surfshark is working on every popular device and OS: Windows, macOS, iOs, Android, Linux, and FireTV. As well as NordVPN and ExpressVPN, they do offer extensions for Chrome and Firefox.

Surfshark is great once the question comes to pricing. Their cheapest plan starts from $2.49 USD/mo ($59.76 billed every two years), while their 1-month plans are almost at the same pricing level as NordVPN – $12.95 USD/mo.

Putlocker is not safe – here’s how to change that